NSM Music was founded in 1951 by Herbert Nack, Gerhard W. Schulze, and Wilhelm Menke of Löwen-Automaten who created the company in Germany to produce American style jukeboxes. they were the sole importers and distributors for Seeburg jukeboxes in the early 50’s but produced their own jukebox in 1956, the Fanfare 60. 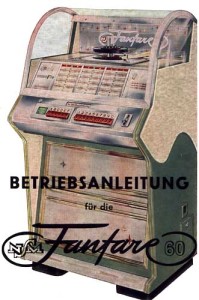 Renowned for their use of technology, by the late eighties, the NSM factory in Bingen, Germany was considered the largest jukebox manufacturer in the world, holding many design and engineering patents. when Cd took a hold in the  late eighties NSM built the fastest CD changer mechanism in the industry and are known for their variety of wallmount CD models